On January 24th, a Minneapolis government employee led a public forum entitled “Immigrant Moral Witness, Moral Action.”
I’m posting this for a couple of reasons. First, to show you once again how the Open Borders (really I should call them No Borders) activists are working to control the language.  The implication is that if you don’t agree with them, you are somehow immoral!
And, of course they are again trying to get the media and you to think about all immigrants (legal and illegal) as “New Americans.”
But, more importantly I want you to see that they are organized and have tips for the types of actions they want citizens to take. Are you getting organized?
From the MinnPost:

At last week’s “Immigrant Moral Witness, Moral Action” forum at First Universalist Church of Minneapolis, Michelle Rivero wrapped up her presentation by talking about the importance of speaking out with love. Given her experience as an immigration attorney and as Minneapolis’ first-ever director of the newly created Office of Immigrant and Refugee Affairs (OIRA), Rivero said it was an emotional but necessary bit of information shared amid the rest of the night’s topics. Rivero expanded on her comments for MinnPost, and provided some nuts-and-bolts information for anyone interested in helping out in the face of how the federal government is treating asylum seekers and would-be new Americans.
[….]
“I strongly feel that if you are advocating for a position, it’s important to do so with sincerity, with honesty, with humility. If an issue is very important to you, and obviously immigration is very important to me, I think the more that we can all do to convince people of why the path that we feel we should be on is the right path, the better off we’ll be as a society. And I think when you do that with sincerity, even people who disagree with you, you can find commonalities with.

Now here (below) are Rivero’s ten tips for Minnesotan Open Borders activists. (It isn’t just more Somalis they are looking for!).
Read the whole MinnPost article for details because it will give you information you can use if your goal is to see immigration to the US (and to Minnesota) brought under control.  Knowledge is power!
1. Give money to organizations and causes.
2. Be a vocal advocate for the causes you support.
3. Support an organization working to provide support to asylum seekers at the border
4. Pay immigration bonds.
5. Learn about what your city is doing regarding immigration-related issues and ask how you can partner.
6. Send local immigration attorneys to the border.
7. Support the work of Clues and other social service organizations.
8. Be informed on immigration issues and issues that touch immigrants.
9. Support MIRAC (Minnesota Immigrant Rights Action Committee).
10. Support Release MN8.
Read it all, here.

It is one thing to read news on the internet and to watch cable news, but are you talking to those around you and getting politically organized? They are!

You might have seen the news about the big federal bust of a Chinese fraud ring responsible for bringing in pregnant Chinese women to give birth so that their babies would have US citizenship, but why is this the first big bust?
This scam on America has been going on probably for decades. I’ve been hearing about it for more then ten years!

I repeat: Why did the US government permit this to go on so long? (long enough for the perps to become millionaires!).

Here is the Fox News story, but for more of the disgusting details see the Department of Justice press release, here.

Federal authorities charged 19 people on Thursday in the first crackdown on birth tourism businesses, which prosecutors say bring hundreds of pregnant women from China to the United States.
Among the arrested were Dongyuan Li, 41, whose business was called “You Win USA,” which coached pregnant Chinese women on how to get into the United States to deliver babies. Those infants would then enjoy all the benefits of American citizenship. Over two years, she raked in millions through her business, where mothers-to-be paid between $40,000 and $80,000 each to come to California, stay in an upscale apartment and give birth, authorities said.
Jing Dong, 42, and Michael Wei Yueh Liu, 53, who allegedly operated “USA Happy Baby,” also were arrested.
More than a dozen others, including the operator of another such business, also face charges but are believed to have returned to China, said the U.S. attorney’s office in Los Angeles.
“America’s way of life is not for sale,” said Joseph Macias, special agent in charge of Homeland Security Investigations Los Angeles, in a statement to Fox News.
Homeland Security “will aggressively target those who would make a mockery of our laws and our values to benefit and enrich themselves.”
[….]
While it isn’t illegal to visit the United States while pregnant, authorities said the businesses — which were raided by federal agents in 2015 — touted the benefits of having U.S. citizen babies, who could get free public education and years later help their parents immigrate. 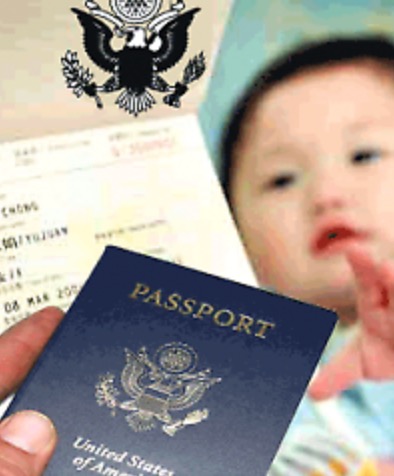 Be sure to see the DOJ press release with more gory details.
Note that many of those whose indictments are now unsealed have left the country.
Here is one paragraph that you need to see which tells you that our Justice Department took a helluva long time to go after these Chinese crooks.

The federal investigation into Dongyuan Li’s You Win USA scheme has resulted in seizure and/or forfeiture proceedings against three real properties with millions of dollars in equity, including her $2.1 million residence in Irvine; six vehicles, including four Mercedes Benz vehicles; more than $1 million from bank accounts; and many gold bars and coins.

By the way, China is not the only country sending its nationals to the US for this scam, I see that the Russians are doing it as well.  And, I am sure those two countries are not alone in taking advantage of us.

What should you do?

Spread this news as far and wide as you can, don’t allow it to be a flash-in-the-pan national story!

Thinking about running for political office? You could and should build your whole campaign around fighting fraud!  It would be a winner!