Watch for the Biden Administration to begin weaving and dodging on issues involving defunding the police and “reimagining” policing as Americans now feel safer about the Chinese Virus, but are feeling increasingly less safe from violence especially in large Democrat run cities.

The George Floyd rioting has finally sunk into the American psyche and many are realizing that they need the police after all. 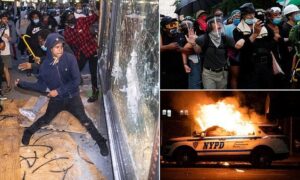 The Republicans just got some news that they can use!

Tie every Dem running in 2022 to the anti-police message of the faltering Black Lives Matter movement.

You can bet the real numbers are even worse for BLM and others pushing their racist message because those polled by Yahoo News likely already leaned to the Left.

In stark contrast to last summer, more Americans now say violent crime is a “very big problem” in the U.S. than say the same about COVID-19, according to a new Yahoo News/YouGov poll — a shift that suggests policing and public safety could come to dominate U.S. politics as the pandemic subsides, potentially putting the Biden administration and Democratic leaders on the defensive.

In a certain sense, this isn’t surprising. While mass vaccination has driven COVID-19 cases, deaths and hospitalizations to their lowest levels in many months, violent crime has been rising (even though it’s still occurring at a far lower rate than it was for much of the 1990s and before).

Nearly two-thirds of Americans (65 percent) now believe violent crime is increasing, including 76 percent of Republicans, 68 percent of independents and 63 percent of Democrats, according to the Yahoo News/YouGov poll. It’s the rare issue that elicits bipartisan agreement.

What is striking, however, is that while anxiety about violent crime has held steady across the political spectrum since last summer, concerns about race relations and sympathy with racial justice reformers have fallen sharply in the wake of the protests that followed the murder of George Floyd one year ago.

Overall, the share of Americans who see race as a “very big problem” in the U.S. is now 13 percentage points lower than it was last July.

As a result, the political scales seem to be tilting away from racial justice reform…

In fact, when Americans who believe violent crime is increasing are asked why, far more now blame “the racial justice movement” itself (57 percent) than blame joblessness (44 percent), systemic racism (40 percent) or the pandemic (35 percent).

Then this made me laugh….”Experts debate…”   There is no debate. Anyone with half a brain could see that the Progressives’ rhetoric was encouraging violence. 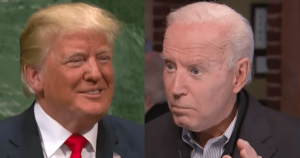 Experts debate whether progressive reforms and critical rhetoric have played any role in encouraging violence; they tend to cite the pandemic and record gun sales  [Duh! up because people are trying to protect themselves—ed] as likelier factors.

Either way, the issue could vex Democrats going forward.

Asked who has done a better job handling crime, more Americans (34 percent vs. 32 percent) and independents (39 percent vs. 23 percent) say Trump than Biden.

Quick!  Find every Democrat (or weeny Republican) you can find who snuggled up to BLM (or Antifa) in the last year and capture their laudatory words and images before they are scrubbed.