Uh-oh, is the bloom coming off the rose for the Biden Administration?

More importantly is Biden handling immigration so abysmally that his chances of getting any sort of comprehensive immigration reform (the holy grail for the Dems) diminishing with each photo of kids in cages.

Forget about the AP’s spin on the findings in their new poll, here at The Seattle Times, and look at the data they have dredged up.

I am assuming Harris, waiting in the wings to replace Chairman Joe when his health finally crashes completely, doesn’t want to be associated with Biden’s immigration mess and is thus hiding from their Ha! Ha! 81 million voters on the issue of border security.

Indeed what did their voters think they were getting.

WASHINGTON (AP) — More Americans disapprove than approve of how President Joe Biden is handling the sharply increasing number of unaccompanied migrant children arriving at the U.S.-Mexico border, and approval of his efforts on larger immigration policy falls short of other top issues — suggesting it could be a weak point for the new administration.

LOL! Don’t you just love the AP’s opening paragraph. No kidding!  A weak point!  Voters love Biden on everything  AP wants you to know, but maybe not so much on immigration!

Here is the data: 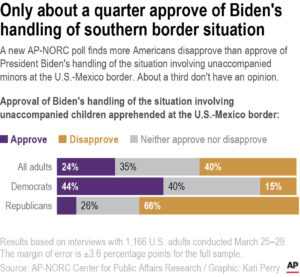 Of course we expect those polled will virtue signal and say the kids, actually mostly teenagers, should receive safe treatment. That is not the big news here.

See how the AP spins this graphic below while the real takeaway is this:

A majority 53% of Americans say it is a high priority to have a secure border with another 31% saying it is a moderate priority.

Only 29% think that it’s a high priority to legalize those who came here illegally. 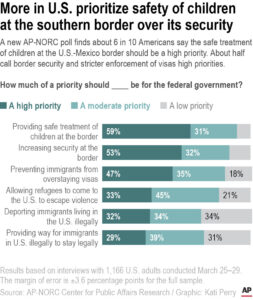 We demand to know if migrants will be placed in our towns!

While we are on the subject of polls, see the Washington Times report yesterday about a poll that shows that most Americans want notification, and an opportunity to say NO!, if illegal aliens will be moved by the feds into their communities.

Americans overwhelmingly support giving communities a say in whether illegal immigrants will be released into their communities, according to new polling released Tuesday.

Nearly eight in 10 people said it was important “for authorities to inform and obtain elected community leaders’ approval before relocating migrants to communities across the country,” the survey found. Support for the idea was strong across all political ideologies.

Keep reading and see that 80% are also worried about the migrants bringing COVID in with them.

Even Biden/Harris’s own voters are increasingly unhappy with what they are seeing and just imagine how much higher the numbers would be if all of the mainstream media was honestly reporting on the border crisis.

Your assignment: continue to wrap the border crisis around the Dems necks, not just as a political tool, but because border security is essential to our very survival as a sovereign nation.

Let’s hope and pray it isn’t already too late.

6 thoughts on “Poll: Only 24% of Americans Approve of How Biden/Harris Handling the Border Crisis”