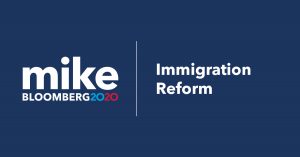 6 thoughts on “Michael Bloomberg’s Plan for Immigration: We Need More!”