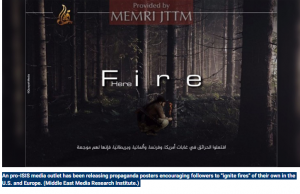 One thought on “ISIS to its Followers: Cause the West Pain by Setting Forests Ablaze”