A great phrase which for me crystallizes in one question and eight words where we are today. 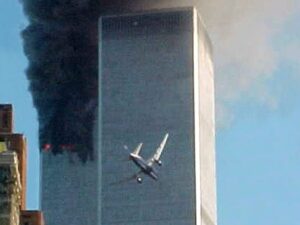 Do not miss the guest column by Dr. William Scott Magill & Lawrence Allen at World Net Daily posted a couple of days ago.

Have you had your Second Tower Moment yet?

Few who were alive at the time can forget the moment the first plane hit the North Tower of the World Trade Center in New York City on 9/11. Over the intervening 18 minutes, people remarked that there were 10,000 people in those buildings on any given workday. And some talked about a B-25 that crashed into the Empire State Building in dense fog in 1945. Nearly all were wondering how those kinds of accidents can still happen in the 21st century. In those tense minutes, everyone knew something was terribly wrong, but they were in a First Tower Mentality.

When the second plane hit the South Tower, everyone suddenly had a Second Tower Mentality. They didn’t need to hear about the Pentagon or Flight 93 or see reports about who al-Qaida and the Taliban were. That would come later. All knew when that second plane hit – America was under attack.

Many feel precisely the same way today: Americans and our constitutional republic are under attack. But not from strange foreign adversaries with names that took practice to pronounce.

Instead, it’s an attack from “Enemies Domestic” right here at home – household names like CNN, Nancy Pelosi, Seattle Mayor Durkan, California Gov. Newsom, your local faceless city council members, Soros-selected district attorneys and the usual suspects of academics, race hustlers and deep state operatives at all levels of government. Like al-Qaida, they are working to rob you of the blessings of your birthright, your liberty, your livelihood. Their goal is to: destroy your safety and security; burn down our nation; erase Western civilization history; and destroy our way of life so they can enforce their tyrannical form of government in a socialized world without borders.

We are under attack.

Do you remember how you felt on September 11, 2001, and have you arrived at your “second tower moment”—the 2020 version?

If so, can you say exactly when that happened?

But, more importantly as authors Magill and Allen ask, are you “cowering in place, curled up in the fetal position, relieved that at least, “they haven’t come for me yet”?

Let me know by commenting to this post what you are doing to prepare!

9 thoughts on “Have You had your Second Tower Moment Yet?”