Editor:  Don’t miss this morning’s post at RRW about how much the President is saving taxpayers by cutting the US Conference of Catholic Bishops funding!

Reader Jonathan directed me to this important post by Todd Bensman at the Center for Immigration Studies on Friday.

TAPACUHLA, Mexico — Honduran Katherine Cabrera is among thousands of migrants who didn’t expect to get bottled up in this southern Mexican city, unable to proceed to the American border as planned, because of President Donald Trump’s insistence that Mexico block them with troop deployments and whatever else the Mexicans could come up with.

New Mexican travel restriction rules required that Cabrera either go home with her newborn child or stay here in Tapachula to apply for Mexican asylum and await an outcome perhaps months in the future. Rather than return home as some have, though, Cabrera said she reached a carefully reasoned-out decision. She’ll stay in Mexico and pursue that asylum claim in a calculated gambit: that Donald Trump will lose the November 2020 election and once the Democrats control the White House, they’ll reverse everything Trump did and reopen the U.S. southern border so that she can finally breach it.

“I want Trump out!” Cabrera said. “I’ll wait for that because it would make things easier to get in.”

Read it all and then see that additional migrants from Central America can’t wait and were attempting to break into Mexico just over the weekend. Story from Reuters. 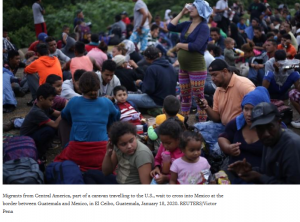 Meanwhile the President has announced a new effort to halt the explosion of so-called “birth tourism.”

And, his refugee reform has been temporarily halted by a court injunction sought by the federal refugee resettlement contractors that stand to lose millions of tax dollars if the President reins-in the dysfunctional Refugee Admissions Program.

Moral of the story—everyone needs to get busy to re-elect Donald Trump.

Demographics is destiny! We need an additional four more years to work on halting out-of-control migration.