This is a fascinating tale and the latest news coming from Texas about alleged serial killer Billy Chemirmir’s horrific crime spree (and one the corporate media has successfully blocked from widespread distribution).

Imagine for a minute if a white man had been smothering vulnerable senior citizens (18 at least!) and stealing their jewelry and other valuables.  Imagine if the victims were people of color—it would be front page news every day all day!

See my extensive coverage of the unspeakable horror story here.

Now this from the Dallas Morning News (kudos to them for never quitting on a story that goes against the prevailing media narrative that only black lives matter).

The family of Mary Bartel, who died in February of last year, has published a book about her life, publicly acknowledging for the first time her role in cracking the case.

Seven of Mary Bartel’s neighbors had been found dead by the time the stranger knocked on her door. 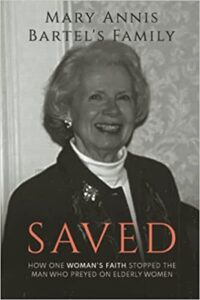 Jewelry and other valuables were missing from their apartments at Preston Place Retirement Community in Plano, but police and paramedics said their deaths must have been from natural causes, like heart attacks.

And though a stranger had been spotted on the property and fliers were posted warning residents about him, no one suspected he was robbing and killing the women until he visited Bartel.

Billy Chemirmir, 48, was arrested the next day, accused of forcing his way into her apartment, trying to smother her with a pillow and stealing her jewelry. He has since been charged with 18 counts of capital murder in Dallas and Collin counties.

Police have long said a woman who survived an attack in Plano helped lead them to Chemirmir, but they hadn’t identified her publicly, though Bartel’s name appears in court documents identifying her as the surviving victim.

Keep reading to see how she did it!  (I hope the story is not behind a paywall for you!).
I’ve just purchased “Saved.”
As the blurb at Amazon says….

Saved is the story of Mary Annis Bartel, a 91-year-old widow and retired schoolteacher living in an independent living retirement community in Plano, Texas. When perhaps the most prolific serial killer of modern times targeted Mrs. Bartel as his next victim, an unexpected outcome caused a remarkable series of events.

4 thoughts on “Dallas: One of the Last Victims of the Kenyan Killer Lived; Helped Break the Case”