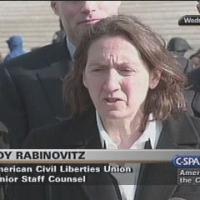 One thought on “Chinese Illegal Aliens Turned Back at US Border; ACLU Fights for Them in Court”