Today is map day for me!  See RRW this morning to find out if your city is a prime refugee resettlement site.

And, thanks to Richard (@highblueridge) for tipping me off to the presence of maps that show just how much of the US is under the influence of Mexican drug cartels.

According to a 2016 Business Insider story, the Sinaloa cartel controls the lion’s share of the illicit drug market in the US.

These maps are a bit outdated, but definitely still worth having a look at! 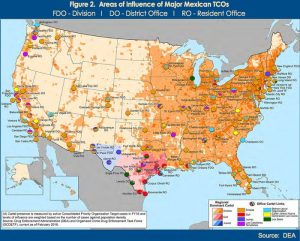 If anyone sees newer maps that would indicate any progress during the Trump Administration, please send link my way!