Editor: I’ve been away.  I took part in a panel discussion over the weekend about internet censorship and explained how wordpressdotcom removed Refugee Resettlement Watch without notice after nearly 12 years of reporting there.

I’m telling you this to explain why you haven’t seen any new posts here for a few days.

Also, there is so much news breaking on the refugee front that I have focused my time over at the newly reconstructed Refugee Resettlement Watch. Click here to see the latest news on the President’s refugee numbers for fiscal year 2020.

Now to the Diversity Visa Lottery…

Wow! Check out his piece by Amil Imani at American Thinker! 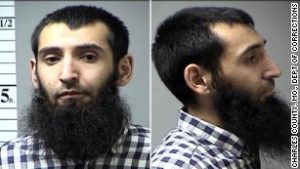 The Diversity Visa Lottery, also known as (the Green Card Lottery) is an immigration program by which immigrants from nations with usually low rates of immigration to the United States are able to apply for a visa online. The platform, however, has been used by terrorists to penetrate America.

On October 31, 2017, Sayfullo Saipov used a rental pickup truck to deliberately mow down pedestrians. After killing eight and injuring 13, he left the truck and shouted, “Allahu Akbar.” Sayfullo is an Uzbekistan national and came to America in 2010. Later officials found a note about his allegiance to ISIS. This attack immediately received worldwide reaction from other lawmakers including the US. A bill proposed in August that would slash legal immigration levels in half over a decade also would eliminate the lottery program.

The bill went to the House and overwhelmingly passed, but halted in the Senate. Each year, the Diversity Visa Program accepts 50,000 randomly selected people — only from countries that don’t send many immigrants to the United States — to obtain permanent residency (commonly called a “green card”). It’s a way for individuals and families who otherwise wouldn’t have any way to legally immigrate to the United States to get a green card.

The program is often seen as one that should be ended in a shift toward a more merit-based system. According to Heritage Foundation: “It does not bolster the skills of the American workforce, nor does it reunite families or serve any humanitarian function. Its only purpose is to increase ethnic and cultural heterogeneity in the U.S. — a dubious goal that weakens the social ties within communities.”

The diversity lottery has been an unwise policy since its inception in 1986, this program. This program is a dangerous gamble. Many Muslims who arrive in America, are deeply indoctrinated by Islamic credos and find it impossible to assimilate into host countries. In fact, their leaders and Imams encourage them to stay away from the American people and only stay within their own community. Hypocrisy is a Muslim trait while they strive to impose their own defunct 7th century barbaric ideology — which is the cause of their own misery — on the host nation.

Both America’s political parties are guilty of keeping much of the U.S. population in the dark about Islam’s mission in the U.S.

President Trump is 100% correct in his campaign to completely abolish this bogus “Diversity Visa Program.” Critics argue that the program is susceptible to fraud and manipulation, and that identity fraud is endemic. Critics also assert that the program poses a danger to national security.

Much, much more here.

See my previous posts on the fraud-filled Diversity Visa Lottery here at ‘Frauds and Crooks.’

Please be sure to spread this American Thinker report far and wide!