If you missed the news about the Philadelphia controversy over the Muslim American Society program that featured young children reading aloud about killing Jews and Christians, here is one recent report about the on-going investigation.


In the wake of that shocking performance we learn, thanks to the Middle East Forum (via Creeping Sharia) hat tip: Michael, that the Muslim American Society is one of many Islamist-influenced organizations receiving government grants.

Research by the Middle East Forum has found that since 2007, federal government agencies have handed over $47 million to 61 Islamic institutions in the forms of 411 various grants and contracts.
On the face of it, this need not be of any particular concern. The government has long relied on contractors and charities from all faiths to implement its programs.
Alarmingly, however, radical Islamic movements completely control 36% of the Muslim institutions that received government monies, taking 42% of the total funding. A further 36% of the grantees, which received 44% of the funds, operate under varying degrees of radical influence. A mere 14% of identified government funds given to Muslim organizations were directed toward institutions free of Islamist influence. 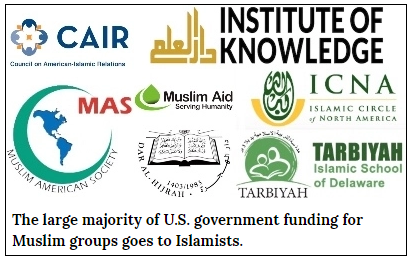 In total, if the government’s own data is accurate, at least $41 million was given to institutions either controlled or under the partial influence of the Muslim Brotherhood, Jamaat-e-Islami (a violent South Asian Islamist movement), Salafis, Deobandis (a hardline South Asian Sunni sect from which the Taliban was created) and the Iranian regime, among others.
Some of the largest amounts involve grants to aid charities. Long favored by Islamist movements as a means to spread ideology through welfare, charities also provide extremists with plentiful funding and the occasional accompanying credibility of government partnership.

Continue reading here to see all of the groups getting gifts from you, via the US Treasury!
It is the same old maddening s***!  Just like all of the so-called religious charities busy changing America by changing the people and doing it with our money!

We have Donald Trump in the White House! Is this kind of funding ever going to end?

This post is filed in my ‘Charity fraud’ category.