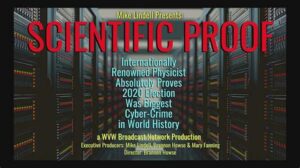 6 thoughts on “Mike Lindell Not Giving Up, New Documentary Shows How They Stole the Presidency”