You watched it all, the dramatic days before the trial to convict President Trump of inciting insurrection, when the remains of Capitol Police Officer Brian Sicknick was honored in the US Capitol and the Dems led by Chairman Joe came to pay their respects.

Don’t misunderstand, I am not saying the officer who died the day after the January 6th attack on the Capitol was unworthy of such an honor, but you know this was all staged by the Dems to create the most emotional impact they could muster in advance of the trial.

Finally however, the story that has been swirling through the media for weeks that the officer died due to a blow to the head by a Trump supporter wielding a fire extinguisher, a story launched into the media ether by the New York Times, is unraveling.

Yesterday, I was out and about and got into a discussion about January 6th with my otherwise sensible (but not well-informed) friend who went into an angry tirade about the officer dying by beaten over the head with a fire extinguisher.

Sadly, the myth has now seeped into American consciousness, likely to stay there forever.

Like so many fabricated storylines intended to damage Donald Trump and his supporters, the New York Times cited anonymous sources to support a shocking claim in an article alleging Capitol Police Officer Brian Sicknick was murdered by a Trump “insurrectionist” on January 6.

“[P]ro-Trump rioters attacked that citadel of democracy, overpowered Mr. Sicknick, 42, and struck him in the head with a fire extinguisher, according to two law enforcement officials,” Times reporters claimed January 8, the day after Sicknick died. “With a bloody gash in his head, Mr. Sicknick was rushed to the hospital and placed on life support. He died on Thursday evening.” 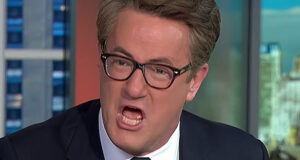 That horrifying account quickly made its way into the vernacular of journalists, lawmakers, political pundits, and regular Americans without dispute. CNN, as Raheem Kassam detailed here, for weeks repeated the line as fact. Ditto for MSNBC. In a tirade earlier this week, “Morning Joe” host Joe Scarborough called Donald Trump a “cop killer” and raged that GOP Senators wouldn’t vote to convict. “When you . . . bash police officers’ brains with fire extinguishers, you don’t get a mulligan,” Scarborough fumed in response to Senator Mike Lee’s comment that the president deserved a pass.

The Washington Post editorial board couldn’t get the basics of the sketchy story straight. “Officer Sicknick was pummeled by a rioter wielding a fire extinguisher, according to witnesses,” the paper alleged, even though the Times cited law enforcement officials and not on-the-ground witnesses. The Wall Street Journal also published the claim repeatedly.

Building on the Times-seeded Sicknick story, so-called conservative opinion outlets insisted Sicknick had been murdered. In a column advising Democrats how to frame impeachment, National Review’s Andrew McCarthy suggested Sicknick should be the “face of impeachment” because he was “murdered” by Trump-supporting thugs.

“An impeachment manager opening the presentation to the Senate could have declared without hesitation: ‘When Officer Sicknick needed a president, Donald Trump was missing in action. When America needed a commander-in-chief to protect the seat of its democracy, Donald Trump wouldn’t be disturbed—he was busy watching television,’” McCarthy wrote on January 17.

Continue reading the recitation of the lie being spread far and wide.  Then this:

But the narrative about what happened to Sicknick is quickly unraveling, as I wrote earlier this week. Not only is CNN, the network that helped perpetuate the initial storyline for more than a month, questioning the circumstances about Sicknick’s death, so too is the New York Times.

“Though law enforcement officials initially said Officer Sicknick was struck with a fire extinguisher, police sources and investigators are at odds over whether he was hit,” the Times reported February 11.

Medical experts have said he did not die of blunt force trauma, according to one law enforcement official. Investigators have found little evidence to back up the attack with the fire extinguisher as the cause of death, the official said. Instead, they increasingly suspect that a factor was Officer Sicknick being sprayed in the face by some sort of irritant, like mace or bear spray, the law enforcement official said. The development, reported earlier by CNN, has complicated efforts to arrest suspects in Officer Sicknick’s death, as both the police and rioters used spray in the siege. It is difficult to prove who sprayed irritant on Officer Sicknick. [There are some reports that Sicknick’s brother said he was sprayed with pepper spray.—ed]

In fact, the Times has slowly backed away from its original reporting without acknowledging its sole culpability in launching the narrative.The paper’s extensive coverage of Sicknick’s memorial at the Capitol included no mention of the fire extinguisher attack.

“Officer Sicknick was ‘injured while physically engaging with protesters,’ after which he returned to his division office, the Capitol Police said. There, Officer Sicknick collapsed and later died in the hospital,” one reporter wrote February 3.

Just like the murder of Ashli Babbitt, I expect we will never have the full story.  I agree if it weren’t for the break-in, Sicknick might be alive today, but the mainstream media has once again been complicit in spreading an apparent falsehood for their own purely political agenda.

No, he doesn’t call himself a RINO (Republican in name only), I call him and the creeps at places like the Lincoln Project that, but that is who he is talking about.

Surely you remember Anthony Scaramucci, a supposed Trump loyalist, who lasted only a few days, a week, or whatever it was as a Trump White House Communications Director.

(By the way, it is my view that President Trump’s greatest shortcoming was that somehow he, or those hiring the people, seemed only able to find people who did not have Trump’s, or our America First’s interests at heart.)

He was on Anderson Cooper last night saying that the never-Trumpers might have a convention in the fall to see if they will break away from the Republican Party.

Not a bad idea, leave the Republican Party to the America Firsters!

President Trump’s former Director of Communications, Anthony Scaramucci, appeared on Anderson Cooper 360, Monday, to discuss the state of the Republican Party. Scaramucci, a lifelong Republican, claims there is a sizable faction of members of the GOP who are looking to create a new party.

This next line is amusing.  Does he really think that the 63% of surveyed Republicans want a new party that would follow Scaramucci and his ilk.

The 63% are Trumpers who want a new party!

“Listen, 63% of the surveyed Republicans say that they want a new party,” said Scarmucci. “I think there’s a large group of people in the party that are organizing now and are debating whether or not to have a faction inside the party or to literally spin out and have a fall convention for a new party as a precursor to the congressional midterms and then start slating candidates.”

Scaramucci believes that 10-15% of current GOP members would be willing to leave in disagreement with what the party has become under the previous administration.

He says that the majority of Republicans who love Trump “want to destroy democracy.”

“You can go with radical fringe Trumpism, where these people literally are signaling to you that they want to destroy your democracy,” said Scarmucci. “Or you can try to set up, people that really love the country, that have center-right values can try to set up something new.”

Hey, Scaramucci, if you start a new party will you promise to take Mitch McConnell and Liz Cheney with you!

It was for stories like this one that I created a special category here at ‘Frauds and Crooks’ entitled Political rats.