Why am I not surprised!

There was a time that conservatives looked to the Heritage Foundation as a bulwark against the Leftists’ drive to change America as they say they advise Congress on important legislative priorities.

But, in my view their reputation has been seriously tarnished in recent years as frankly they seem to have become just one more swamp dweller with little regard for the ‘deplorables’ including those now in Trump’s America First base!

My first experience with them was back in the late ’80s and early ’90s when hundreds of landowners, ranchers and farmers had come together to form a national property rights grassroots organization to push back against the federal taking of our land.

I was deeply involved in the movement (I mentioned it here recently) and so I went to Washington to see if I could get the Heritage Foundation to give the fledgling grassroots movement some backing (support, not funding!).  They simply brushed us off as if they didn’t understand what grassroots activists could do, or were doing, on a core conservative issue—property rights—as Congress was working to take more of our rights through draconian environmental laws.

Their fate was sealed in my eyes when in 2017 they took a position in FAVOR of more refugee resettlement to America.  Here is one post I wrote at the time, but there are several more in 2017.

An aside: maybe Heritage might want to take a look at recent poll that shows how unhappy Americans are with Biden’s plan to bring in 125,000 refugees in the coming year. On that issue Heritage is apparently on the side of business  and the likes of the Chamber of Commerce and not on the side the people!

Earlier, in 2016, a reader suggested I join Heritage’s Sentinel grassroots outreach, but I very quickly learned that they were never going to involve themselves with restricting immigration. Why?  I suspect it has to do with big business donors always on the hunt for more cheap labor.

Here is the news about Pence comfortably ensconced (big salary?) at the Heritage Foundation until he can emerge as a Presidential candidate in 2024 (not a chance in hell in my view).

Perhaps one of Trump’s greatest failings as President was that he followed the advice of swamp dwellers, like Heritage, and chose staffers who were in many cases not loyal to him and his America First message.

Mike Pence will be joining the Heritage Foundation as a distinguished fellow, the organization announced Thursday, making the former vice president the latest member of the Trump administration to migrate to the conservative think tank. 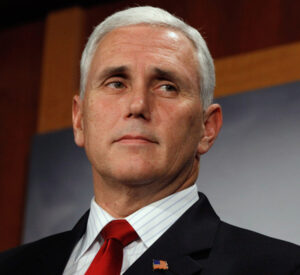 The Heritage Foundation announced Pence’s new position in a Thursday statement, explaining the former VP’s duties will include advising on and giving speeches about public policy issues, and contributing to a monthly column for the think tank’s multimedia news outlet, The Daily Signal.

…read the announcement, touting Pence’s “allegiance to the Constitution and commitment to advancing a conservative policy agenda.”

In addition to his work at Heritage, Pence—who is widely expected to run for president in 2024—will focus on helping the GOP in the 2022 midterms, and reportedly plans to launch a policy-related fundraising committee.

Pence is not the only displaced member of the Trump administration to land at the Heritage Foundation. The think tank announced in late January that it had brought on three former Trump administration homeland security officials as fellows: Chad Wolf, who served as acting secretary of the U.S. Department of Homeland Security (DHS) before departing in the aftermath of the Jan. 6 Capitol attack, former deputy secretary Ken Cuccinelli and former acting commissioner of U.S. Customs and Border Protection.

The D.C.-based think tank, which is nearly 50 years old, played a subtle—yet substantial—role in the staffing of the Trump administration.

Don’t send your money to the Heritage Foundation!

If Heritage is just a place to park Pence and other RINOs for a few years, let Liz Cheney and Mitch McConnell fund them!  Hey, and maybe the Lincoln Project has a few millions to spare.

Put your hard-earned money directly into the hands of America First! office holders and candidates.

You are basically funding some huge salaries for the upper echelons and affording a bunch of has-been professional politicians a place to park their butts so they might ‘think.’

In that Form 990 we learned that the Heritage Foundation think tank took in around $75 million.  See on Page 10 that the vast majority of their expenses were for things like salaries and employee benefits, office expenses, travel, fundraising etc.

Notice also on page 2 that their revenue has been steadily and precipitously declining over the previous years.

And, the best part is the salary pages!  They are a charitable non-profit organization and have every right to pay huge salaries, but you have a right to know where their money goes before you give them yours.

(As a point of comparison, rank and file Members of Congress and US Senators make $174,000 a year.) 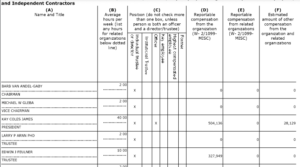 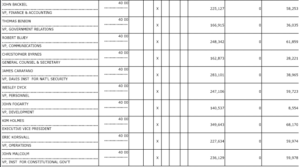 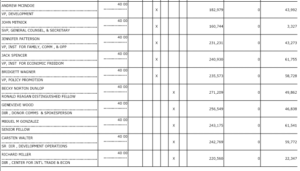 Watch this video produced in October before Youtube takes it down AGAIN:

Too funny! I saw it on Gab last night and was surprised it was still up at Youtube.  This morning it was gone, but someone had put it up again last night.

So watch quickly and let’s see how fast it comes down!

It is a great reminder as Trump is standing trial for encouraging riots.