I hope by now you have added Gateway Pundit to your daily reading rounds.  I really don’t need to be re-writing what Jim Hoft and his investigators are saying, but this post fascinated me.

Who is in the black car that appears to escort the van? 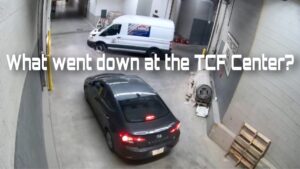 On Wednesday morning, November 4th President Trump was ahead of Joe Biden in the swing state of Michigan by over 100,000 votes.

This appeared to be another solid win for President Trump in a swing state he won in 2016. The ballot counting in Detroit, Michigan on election night took place at the TCF Center, formerly known as Cobo Hall.

Then late at night, a string of suspicious events changed the momentum for the Trump Team. GOP observers later testified that at 3:30 AM in the morning vehicles drove into the TCF Center and delivered fraudulent ballots for Joe Biden.

Go to Gateway Pundit to watch the video!

If the great Election Steal of 2020 is to be solved, it will be by independent journalists and bloggers like Gateway Pundit.

I have been writing at Refugee Resettlement Watch since July of 2007 except for a few months after the speech police got me deplatformed, but I think I have done all I can do for you who live in communities that are refugee resettlement sites, or soon will be.

This morning I spent all of my writing time on this post.

The gist of it is this:

You must organize locally to save your communities from those who are changing your towns and cities politically, culturally, demographically.

Trump can’t save you (us)!  Although if he returns to political life the best thing he could do would be to create America First grassroots chapters in every county in America with a first order of business straightening out the local board of elections!

Your governors are mostly useless as they are in cahoots with big business looking for cheap labor.

Your Members of Congress, even most Republicans, are in the pocket of the Chamber of Commerce and they are scared to death of being labelled racists for opposing the “good” people, the phony humanitarians, in charge of the refugee agencies.

You might have some hope with your state legislators, but it is now up to you to find out what is happening locally, get involved, speak up, get organized and maybe even run for local political office.   Yes, hard and boring work.

It is more fun and might make us feel good to yak about tyranny and unfairness among ourselves, but it is a waste of time.

And, so what if you are well-read on the cutting issues of the day and have tens of thousands of Twitter or Facebook followers—it will not stop the Socialist Democrat juggernaut working incrementally to control your local community or state.

Remember Obama’s community organizing!  They have been working for decades at that level and you have a lot of catching up to do.