And he did that as we learned that the refugees we admitted in recent years are suffering due to joblessness, evictions, and hunger.

Frankly, it is insanity as so many Americans are suffering due to the China virus lockdown that we are going to bring in a number of refugees not seen in nearly 30 years.

My RRW posts of the last few days could just as easily have been posted here at Frauds and Crooks.

Biden Says He Will Raise Refugee Ceiling “Back Up” to 125,000 as Americans Suffer Joblessness from Chinese Virus Lockdown

And, just yesterday as well: Refugee gang-raped in slum neighborhood in Columbus, Ohio.

And, this ten days ago:

Refugees Struggling in America, Yet Biden Promised 125,000 New Refugees in 2021

Visit RRW from time to time.  I will be busy there.

You also might want to check out my Refugee Resettlement facebook page which reached over 100,000 in the last month. Lots of commenting going on there so I am not ready to dump facebook.

I’m sounding like a broken record, but one of the most valuable (peaceful!) political tools is ridicule and if you haven’t seen it, President Trump’s letter to a snooty actors’ union will have you rolling on the floor laughing.

Here is Newsweek’s description of what The Donald did:

Donald Trump’s days in the Screen Actors Guild are over [Gasp!–ed]. The former president resigned from SAG-AFTRA (American Federation of Television and Radio Artists) on February 4 in a letter addressed to the guild’s president, Gabrielle Carteris. Trump had been a member of SAG since 1989…

His letter of resignation came after SAG-AFTRA National Board ordered a disciplinary hearing for Trump following the January 6 insurrection on the Capitol. [Insurrection?—ed]

Here (below) is the letter.

If this is a sign of what we can expect from the President once the Congress gets past the UNCONSTITUTIONAL IMPEACHMENT CHARADE, this is going to be fun!

(In order for me to enlarge the letter, I separated the header, which I did not want you to miss, in the following screenshots.) 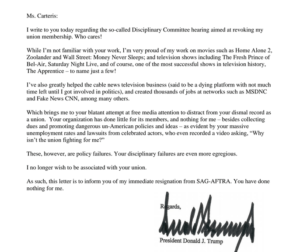 It will be very difficult for them to look powerful, if they look foolish.  So let’s all laugh at them every chance we get!

That reminds me, as Twitter is keeping me from getting to my account (I refuse to give them more information about myself), I have moved over to Gab where I have to be careful.

Because there is so much humor there that I find myself sucked into reading gabs and not getting a lot else done.  Deplorables are so clever!