As I have been hinting here, I am slowing down.  There are many many fantastic sites covering fraud especially now as it relates to the massive election fraud we are daily seeing exposed.  With only so much time in a day that I can devote to posting, I’ll concentrate right now at RRW since it really isn’t covered much these days elsewhere.

I have posted 9,557 posts at RRW since 2007 and I need to continue to build on the archives there.

I will still post here, but am driving myself crazy trying to do both.

This morning I’m working on a post on China and the fact that they don’t want any Middle Eastern refugees (actually they don’t take refugees at all).

One last thing, before the speech police took down RRW I had thousands of subscribers that were lost and I have never regained them. Of course when Trump won in 2016 all of us naturally assumed the refugee controversy was behind us.  It isn’t and now more than ever it will come raging back if Biden/Harris steal the election. 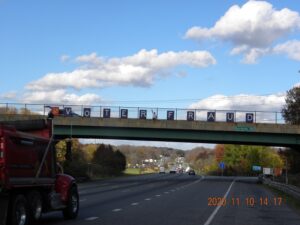 My friend Richard from Blue Ridge Forum said this on his facebook page about the novel protest.  (BTW, there will be a pro-Trump rally in DC on Saturday!)

Yesterday Maryland Overpass-Media veterans Ed Hunter and Lewis Porter displayed their arresting signs on Gorman Road Bridge in Howard County over Northbound I-95 from 2 to 5 pm.

“Great day, lots and lots of positive responses with waves and honks from the highway. Very few negative responses. All in a very beautiful day for an active political protest. One small negative response from a woman who stopped the car on the bridge to yell at us to ‘take our sign down.'”