Yesterday, literally hundreds of thousands of patriots of all colors, creeds and ages descended on the Nation’s capital to send a message of support to the President and to protest the legitimacy of the 2020 presidential election and the media’s coronation of King Joe and Queen Kamala. 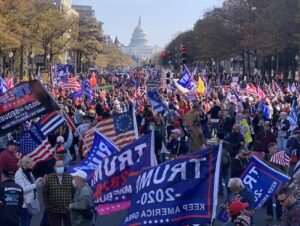 I am so glad I was there or I wouldn’t have believed it. Reading news accounts in the mainstream media last night and this morning confirmed again what a lying bunch of partisans control the media.

Look at this headline from an AP news story:

Thousands rally behind Trump, believing he won race he lost

AP declares the race over even as counting and lawsuits continue. And “thousands.”  I’m telling you there were hundreds of thousands, but they could have been forgiven if they had at least said ‘tens of thousands.’

Look at the size of this crowd down Pennsylvania Ave.

More than a MILLION people showed up to support this President.

And, virtually all of the mainstream media reported that there was violence “on the margins.”  I was there for hours and saw NO violence, only passionate and courteous people who believe the election was stolen. Yes! Stolen!

I was there for the big Tea Party rallies of a decade ago, but this beat anything from that era. Yesterday, like ten years ago, the mainstream media, the fake news, downplayed the enormity of the patriot crowds that gathered then and now.

Yesterday was different for another significant reason summed up in one word—diversity.

Tea Party rallies were largely middle to upper class mostly white Americans, while the diversity represented in the crowd yesterday was remarkable.  The supporters of this President, who came to Washington on short notice, are from all walks of life economically and were representative of the ethnic diversity of America. There were people of color sporting their Trump shirts and hats, large numbers of Hispanics and Asians waving Trump and American flags everywhere.

A Chinese woman came up to my friends and I outside the Supreme Court and implored us to fight the “demon” Chinese Communist Party which she feared would have more power in America if Biden is installed as President.

Again, as I saw no violence for the many hours I was there, it surely happened when night fell and the Antifa/BLM thugs came out like rats and roaches as darkness came to DC.

This is terrorism and a hate crime. Where is @TheJusticeDept? @FBI?Police? Just because Democrats + the media have lost their minds and accepted the terrorism of Antifa and BLM as normal doesn’t mean you need to. Arrest these terrorists and charge them! pic.twitter.com/HZMV4SZuQp

And, here are Biden voters attacking Trump’s people who dared to stay on a Washington street after dark.

It’s beyond time to #walkaway

Antifa black bloc in DC beat a man on the head using a stolen flag as a stick. They’re still roaming the streets tonight in packs looking for Trump supporters. Video by @livesmattershow: pic.twitter.com/uY4A0SYcww

I have searched through dozens of media accounts and photos but none, including mine, could do justice to the number of America Firsters! who came to Washington, throwing caution to the wind when it came to the Chinese virus, and clearly having decided that being there was more important than possibly dying.

Oh, and when you see accounts that no one was wearing masks, that is wrong.  Many people did wear masks.

Here are a series of still photos from NPR that I thought were mostly good, but you can tell the Lefties at NPR have added a bunch of photos that are meant for the elites to get a chuckle among themselves about the “deplorables” and “chumps” that make up Trump’s huge base.

First, do you want this America?

And, this man’s sign sums up why so many were willing to risk China virus death to be there! “Give me liberty or give me a 0.016% chance of death!” 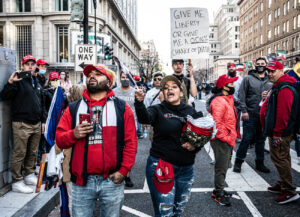 And, sadly I never did see the Proud Boys that the mainstream media is so afraid of.  Here praying before the rally. Is there a Proud Girls group I could join? 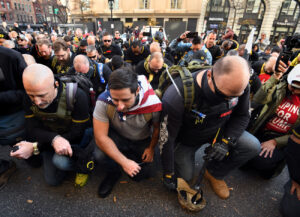 Everyone was hoping to get a glimpse of the President, but alas he drove by early, mouthing “thank you,” before noon and before the most massive crowds had gathered.  Frankly, his motorcade would not have been able to get through the crowds as they swelled to fill that entire space by noon.

Were you there yesterday?  If so please comment and let us all know what you saw and heard!

P.S. Sorry in advance if Twitter ultimately deletes accounts and this post loses some good Tweets and videos.  I wouldn’t be surprised to find that happens.

She said “the diversity and sense of HUMOR of the crowd was what struck me.” 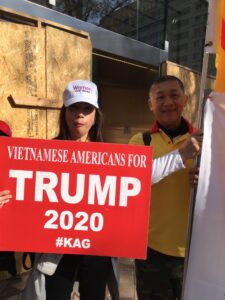 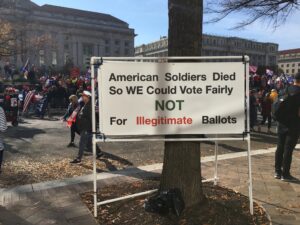 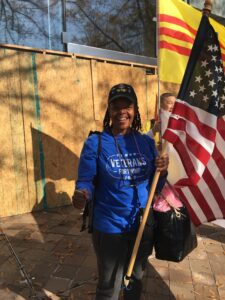 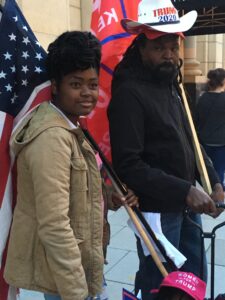 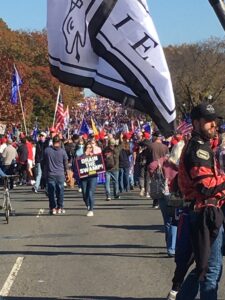 And, to wrap up, another reader from Maryland sent me this comment about the Proud Boys in response to me saying I hadn’t seen them:

I saw the Proud Boys twice. The first time was when they came marching down 13th Street into Freedom Plaza. They were all in black and in formation about five people wide — a lot of them. At first glance I thought they were Antifa because of the all-black clothing, but I soon saw that they weren’t. The second time was at the Supreme Court when again they came marching in in formation. They included several black guys. The first time they didn’t look at the bystanders but the second time they exchanged friendly looks with us. It felt kind of comforting having them there.