Many thanks to the person who pulled all of these heartwarming scenes together in one place.

Watch and send to everyone you know!

You will NEVER in your lifetime see an outpouring of love like this. This awe-inspiring devotion for @realDonaldTrump is also for an America that Democrats want to burn to the ground. Well, American patriots are sick of it. On Tuesday we take America back. pic.twitter.com/bnVa2SSuR3

And so proud of our peaceful people! Enjoy this day!

I doubt we will ever see another political figure in American life who turns out these crowds. Hard to see how this doesn’t translate into huge turnout for Trump. Unreal! https://t.co/MMTxNmhb3K

Jim Simpson writing at American Thinker has pieced together a convincing account of Joe Biden’s nefarious involvement in the affairs of the Guatemalan government and his role in advancing the Communists’ agenda there.

(Remember when we assumed Obama picked Joe so Joe could act as a figurehead to attend boring funerals and such!)

The story is long and convoluted, but puts out a whole NEW set of allegations against good ol’ Joe that includes another possible pay-to-play scheme.

For readers here you don’t need convincing that Joe Biden will damage US security if elected, but if he is elected this week (or in weeks to come!) consider this news as another avenue for patriots to pursue as the resistance to his presidency grows.

For naïve people who think America will calm down with Biden/Harris in the White House nothing can be further from the truth.

Joe Biden’s Hand in Corruption, Subversion and Crime in Guatemala

In 2014 and 2015, then-Vice President Joe Biden traveled to Guatemala three times to pressure the government to maintain a United Nations body known as the International Commission Against Impunity in Guatemala (CICIG).

CICIG was established in Guatemala in 2006 under the pretext of prosecuting “crimes committed by members of illegal security forces and clandestine security structures,” during Guatemala’s long civil war. Instead, CICIG — an international body unaccountable to Guatemalan law, worked with Guatemala’s Justice Ministry to arrest and jail the left’s opponents. Many remain illegally detained to this day without trial. Two prominent doctors and a Guatemalan congressman died in jail. All suffered ill health, did not receive proper treatment and were detained much longer than legally allowed. None got a trial. All were absolved following their deaths.

Biden met with then-Guatemalan President Otto Pérez Molina, who did not want to renew CICIG’s charter. The Obama administration had promised a $1 billion aid package to Northern Triangle countries (Guatemala, Honduras and El Salvador), but Biden made the aid and upcoming trade agreements contingent upon renewing CICIG’s contract. First cajoling then threatening, Biden finally announced, “The CICIG is staying, period.” Biden used this same tactic in Ukraine, where he bragged about threatening to withhold loan guarantees until the Ukrainian government fired the prosecutor investigating Hunter Biden. Biden also sought Pérez’s help in extending CICIG’s rule to El Salvador and Honduras.

Pérez reluctantly agreed to renew CICIG’s charter. He was then pressured to resign under accusations of corruption and stripped by the Guatemalan Congress of legal immunity. The day after he resigned he was arrested and thrown in jail. He has remained there ever since, without trial. In a Daily Caller interview from jail, Pérez called these efforts, “a coup without bullets.”

Pérez said that, “CICIG amounts to a new form of U.S. interference in Guatemala’s affairs and that his country has surrendered its sovereignty over its justice system by allowing the unit to operate.”

CICIG’s litany of abuses includes arbitrary arrest, detention and interrogation without charges or trial, fabricated evidence, illegal break-ins and denial of due process, pretrial detention for years longer than allowed by Guatemalan law and many other abuses. Some of the charges it has brought are valid, given endemic corruption in Guatemala. But CICIG’s goal was not to stem corruption, rather to use it as a pretext to dispatch the left’s enemies and install vastly more corrupt individuals who will advance the Communist cause in Guatemala.

Read it all and save it for more ammunition for the resistance (our resistance).

James Simpson is an economist, businessman and investigative journalist. His latest book is The Red Green Axis 2.0: An Existential Threat to America and the World. Follow Jim on Twitter & Facebook.

If you want to have a look at Biden’s plan for the Northern Triangle Countries including Guatemala if he wins the White House, see it here.  He brags that he was Obama’s point person when the ‘kids’ were crashing our borders six years ago.  You know when the cages were built!  Hmmm!

As the point-person for the Obama-Biden Administration to address the surge of unaccompanied minors from the Northern Triangle in 2014….. 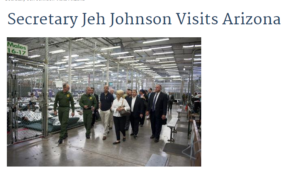