Here is some news from a week ago that I would have missed completely except for the sharp eyes of ‘Meanymom.’

From the Foundation for Economic Education: 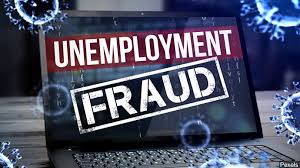 The debate over expanded unemployment benefits has proven particularly fractious, given that the $2 trillion CARES Act Congress passed in March set up a broken economic system where nearly 70 percent of the unemployed can get paid more in benefits while staying home than they would make by going back to work. Yet as important as the ramifications of this distorted big government labor policy are, one largely overlooked consequence of the massive expansion of unemployment is skyrocketing fraud and abuse.

A new report from the fiscally conservative Foundation for Government Accountability exposes the stunning extent to which fraud has corrupted the hastily-crafted unemployment expansion.

FGA Senior Research Fellow Josh Waters found that fraud will consume more taxpayer dollars under this expansion than the entire unemployment program paid out in 2019. 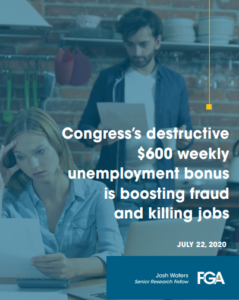 Remember that the unemployment system was already very wasteful before COVID-19, with roughly 10 percent of payments being made in error in 2019. Waters explains that even generously assuming this fraud rate remains constant—it will likely be worse this year due to system overload and COVID-19 chaos—his calculations show a whopping $26 billion will be lost to fraud as a result of this expansion.

“As states try to respond to the historic increase in claims due to shutdowns and layoffs, the $600 bonus payments are making it very lucrative for fraudsters who know many states probably lack the staffing and resources to combat fraud while the systems are overloaded with an unprecedented amount of claims,” Waters writes.

The FGA report documents how this fraud is playing out at the state level:

Mississippi is estimated to have paid out at least $76 million in improper payments so far, and the governor warns the state has been “attacked with false claims”

Needless to say, the reference to Nigerian scammers snapped me to attention.

What is that all about?

Here is the story from May:

The Nigerian Fraudsters Ripping Off the Unemployment System

As millions of people around the United States scrambled in recent weeks to collect unemployment benefits and disbursements through the federal Cares Act, officials warned about the looming threat of Covid-19-related scams online. Now they’re here. 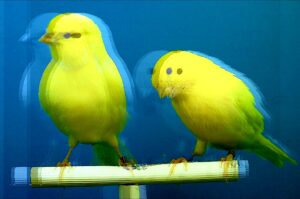 On Thursday, the Secret Service issued an alert about a massive operation to file fraudulent unemployment claims in states around the country, like Washington and Massachusetts. Officials attributed the activity to Nigerian scammers and said millions of dollars had already been stolen. New research is now shedding light on one of the actors tied to the scams—and the other pandemic hustles they have going.

The email security firm Agari today will release findings that an actor within the Nigerian cybercriminal group Scattered Canary is filing fraudulent unemployment claims and receiving benefits from multiple states, while also receiving Cares payouts from the Internal Revenue Service. So far this has netted hundreds of thousands of dollars in scam payments. Regular unemployment, the extra $600 per week that out-of-work Americans can claim during the pandemic, plus the one-time $1,200 payment eligible adults are receiving under the Cares Act are all vulnerable targets for cybercriminals. In the midst of a pandemic and critical economic downturn, though, the theft of those benefits could have particularly dire consequences.

The Secret Service warns that hundreds of millions of dollars could be lost to such scams just as states are running out of money to fund unemployment on their own.

Oh goody, Washington state recovered some of its losses.

But, it wasn’t only Washington state where the Nigerians were busy ripping us off.  According to CBS News, seven states experienced attacks. 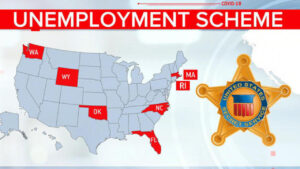 See my file on Nigerians!

P.S. How is your prepping going?  There is an excellent chapter about situational awareness in the book I mentioned in this post recently.