What is up with this?

First we have the stabbing of a Jewish Rabbi in Brighton (5 miles from downtown Boston) and then 10 miles north of Boston, in Wakefield, we have eleven men all decked out in military gear causing a showdown with law enforcement on I-95.

Who knew that we have Moors in America?

And, interesting to me is that in the many stories I read about the I-95 highway standoff, very very few publications bothered to mention that gun-toting Moors, hoisting the flag of Morocco, are Muslims.  I searched for the ‘M’ word and the ‘I’ word in lots of reports on the holiday weekend ‘fun’ to no avail.

Fox does tell us that the Black men are Muslims, but if you are a casual listener of the news you might expect armed White men in military garb!

But, first here is Daniel Greenfield on the stabbing of Rabbi Noginski in Brighton. Mass.

Democrats tolerating and spreading antisemitism through the ‘Squad’ has consequences. So does an immigration policy that floods America with future terrorists.

UPDATE: The Boston Herald has a lot more information on the Egyptian Muslim immigrant who stabbed the Rabbi. 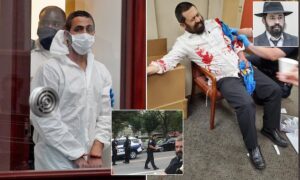 A 24-year-old native of Egypt is being held without bail after being accused of stabbing a city rabbi “seven or eight times” in a daylight attack some are demanding be treated as a hate crime.

That stabbing suspect, Khaled Awad of Brighton, is also being investigated by Immigration and Customs Enforcement and won’t be let out until at least a dangerousness hearing is held July 8, a judge ruled today at his arraignment in Brighton District Court.

The [new American-ed] suspect is named Khaled Awad. He had a knife and a gun. And apparently tried to force the Rabbi into the van.

Rabbi Shlomo Noginski fought his attacker, otherwise he would probably be dead. Awad repeatedly stabbed him, rather than shoot him, but physical butchery is a big part of the death cult of Islamic terrorism. Jihadists prefer to use blades rather than guns because it’s more brutal.

Khaled Awad had a knife and a gun, but he chose to use the knife. He targeted a visible rabbi outside a Jewish institution. He was trying to force him into a van, rather than just taking the van and getting away. These are elements that suggest that this was a terrorist attack.

But the media will begin claiming before long that Awad had psychological problems and is the real victim here.

So that was Thursday.

Jump ten miles up the road and less then two days later….

Massachusetts police arrested 11 people Saturday morning who claimed to be part of a group called “Rise of the Moors” following an almost seven-hour standoff that shut down an interstate.

The heavily armed group posted videos throughout the standoff, claiming to be peaceful and to abide by the “federal laws and judicial opinions” of the United States.

The group’s website says “We are Moorish Americans dedicated to educating new Moors and influencing our Elders.”

Jamhal Talib Abdullah Bey is identified as the Moorish American Consular Post Head for the group: His biography lists him as having previously served in the Marines.

The term Moors refers to Muslim inhabitants of North Africa and southern Europe.

The group claims, on its website, to descend from a wide range of peoples, including “the Olmecs, Moabites, Canaanites, Hittites,” among others, but mainly a strong relationship of American-Moroccans.

As usual for more details and pics, head over to the UK Daily Mail.

3 thoughts on “Muslims Running Wild? At least in Massachusetts anyway!”