Leo has been away working elsewhere in recent months, but he is back now and focusing his journalistic skills and analytic mind on the COVID ‘crisis’ that has brought our beloved country to its knees.

Today he highlights the media bias (and downright fakery) that is allowing the goals of the cultural Marxists to advance in weeks in a war that has been going on for a century.

Here is the photo with which he opens his post, but that is only the first of several stunning revelations (you have been hearing about some of them, but they are all in one place here).

The staff was asked to come out and line up their cars for a staged photo! 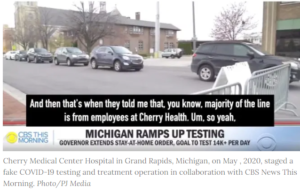 3 thoughts on “Do Not Miss Leo Hohmann Today!”