And, the ‘good doctor’ Fauci was involved during the Obama Administration! 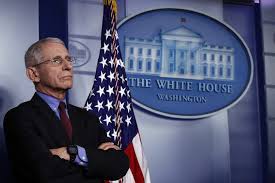 Why isn’t this front page news everywhere?  Why does it take the Asia Times, Gateway Pundit, Powerline blog, and other smaller media to get this story out.

Thanks to reader Paul for alerting me to a Powerline blog post yesterday where blogger extraordinaire John Hinderaker wraps with this paragraph:

Wouldn’t it be great if we had a free press that might ask questions about reports like this one? The problem, of course, is that Dr. Fauci would be the guy on the hot seat, and he is a revered “expert” in the press’s narrative. Even more important, Fauci’s enlistment of the Wuhan lab to do research banned in the U.S. happened in 2015–that is to say, during the Obama administration. If it had occurred during the Trump administration, there would be nothing else on the front pages of the New York Times and the Washington Post.

Please go read it all!  Follow the links for more information.

I haven’t been paying any attention to the Census other than noting that we have received at least three mailings telling us to get it done.

Here we learn that Arab-speaking immigrants to the Detroit area are working hard to be sure they are not undercounted so they can get their government goodies.  But, government goodies aren’t given out to specific ethnic groups anyway.

I suspect the real reason is that they want to be sure that mostly Muslims from the Middle East and North Africa are designated separately as a way to show their potential political power.

DEARBORN, Mich. — (AP) — At a Michigan gas station, the message is obvious — at least to Arabic speakers: Be counted in the 2020 census.

“Provide your community with more/additional opportunities,” the ad on the pump handle reads in Arabic. In the fine print, next to “United States Census 2020,” it adds: “To shape your future with your own hands, start here.”

As state officials and nonprofit groups target hard-to-count groups like immigrants, people of color and those in poverty, many Arab Americans say the undercount is even more pronounced for them.

That means one of the largest and most concentrated Arab populations outside the Middle East — those in the Detroit area — could be missing out on federal funding for education, health care, crime prevention and other programs that the census determines how to divvy up.

That also includes money to help states address the fallout from the coronavirus.

“We are trying to encourage people not just to fill it out because of all the reasons we had given before, where there’s education and health care and all of that, but also because it is essential for the federal government to know who is in Michigan at this point more than ever before,” said Rima Meroueh, director of policy and advocacy with Dearborn-based ACCESS, one of the largest Arab American advocacy nonprofits in the country.

The Arab American community checks many boxes that census and nonprofit officials say are hallmarks of the hardest-to-count communities: large numbers of young children, non-English speakers, recent immigrants and those who often live in multifamily or rental housing.

But groups face a hurdle after the Trump administration decided not to include a category that counts people from the Middle East or North Africa as their own group. The Census Bureau recommended the so-called MENA box in 2017 after years of research and decades of advocacy.

“The community did it right — they went through the process,” she said. “You’re making us invisible.”

Does it make any sense to you? Is the area around Detroit going to get any less stuff if Arab-speaking people of the Middle East and North Africa don’t get a separate category?  Or is it more about flexing some Arab-power muscle?

Do we refer to Muslims in Africa as colonizers or is that dirty word only reserved for western countries that colonized Africa through the centuries?  Just wondering.  Heck we could say that Arabs are colonizing Michigan and Somalis are colonizing Minnesota!

A little fact you might not know: The number one language of refugees admitted to the US for at least the last twelve years is Arabic.