“….the protests appear to have reawakened deep-seated grievances over persistent poverty, unemployment and inequality, some 27 years after apartheid ended.”

“….more than half of the country’s 60 million people were living in poverty last year, according to data collected by the World Bank Group.”

While we are fixated on the unraveling of Communist control of Cuba, South Africa, supposedly another model of the Socialist/Communist dreamers, continues its downward spiral and serves as another present-day reminder of the fact that Communism’s track record is “not so good.” 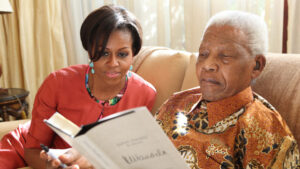 I’m interested in the latest news of massive riots and unrest because South Africa, after Apartheid, was hailed as a beacon worldwide for its welcoming socialist nation image after Blacks took the reins of government.

Heck, Barack and Michelle went there to celebrate the achievements of Nelson Mandela.

I have an extensive archive at Refugee Resettlement Watch on the once prosperous South Africa because over the years the country has become a racist and xenophobic hell hole from which we resettle black African ‘refugees’ that are actually from other parts of Africa who believed the Leftist propaganda that South Africa was welcoming to all.***

I also have posts at RRW about the anti-White violence terrorizing the minority there.  Here is one from 2018:

So here is a quick update on the latest from the ‘rainbow nation.

Call it a cautionary tale!

LOL! The corporate media has been mum on decades of corruption and hatred there (doesn’t fit their biased messaging!), but it could hardly stay quiet as the latest violence is described as the worst in the 27-year history of post-Apartheid South Africa. 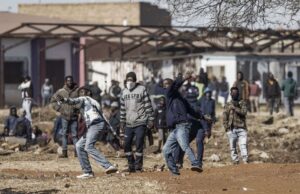 South Africa riots: At least 117 killed, over 2,000 arrested amid worst violence in decades

LONDON and PRETORIA — At least 117 people have been killed in ongoing riots across South Africa despite the efforts of heavily outnumbered authorities to quell violent unrest sparked by the imprisonment of former President Jacob Zuma.

The South African Police Service said in a statement Tuesday that many fatalities occurred during “stampedes” as scores of people looted food, liquor, clothes and electrical appliances from shops in poor areas. Other deaths were caused by explosions when people tried to break into ATMs as well as shootings, according to police.

Violence and unrest has gripped parts of South Africa since Zuma turned himself in to police on July 7 to begin his 15-month jail term for contempt of court. South Africa’s highest court handed down the sentence after Zuma failed to appear before an inquiry examining corruption allegations during the nine years that he served as president. Zuma has maintained his innocence, saying he’s the victim of a politically motivated witch hunt, and his supporters took to the streets last week. But the protests appear to have reawakened deep-seated grievances over persistent poverty, unemployment and inequality, some 27 years after apartheid ended.

“There is no grievance, nor any political cause, that can justify the violence and destruction that we have seen in parts of KwaZulu-Natal and Gauteng,” Ramaphosa said. “The path of violence, of looting and anarchy, leads only to more violence and devastation. It leads to more poverty, more unemployment, and more loss of innocent life. This is not who we are as a people.”  [Gee, where have I heard that line before!—ed].

And here, Gateway Pundit reported on this angle of the news earlier in the week:

***Just for fun look at the Bill of Rights of South Africa’s Commie constitution once praised by none other than now deceased Supreme Court Justice Ruth Bader Ginsburg.

Everyone has a “right” to a job and housing!

Is it any wonder there is on-going violence from citizens or that migrants from other African nations believed this s*** and traveled there to the Black-run rainbow nation.

It is all over the news today and I plan to write about it at Refugee Resettlement Watch shortly.  But, here is just one of many stories on the ban expected to be announced on Monday, this one at the New York Post.

The Trump Administration must have credible concerns about criminals and possibly terrorists entering the US from the new countries being proposed.

Coincidentally I just saw this Youtube video (h/t: Bob), below, and ask you to make sure your friends and family members know what is already happening to America as we move the African continent to your home towns.

No, this is not somewhere else in the world—This is Minnesota!

That is what Judicial Watch is reporting.  Thanks to reader Cathy for the tip.

This is an update of news I shared at RRW last month, here.

Mexico has seen an astounding 250% increase in Africans trying to enter the United States through the southern border, according to the latest figures released by the Mexican government’s immigration agency, known as Unidad de Política Migratoria. The stats include the first eight months of 2019 and reveal that, during the same period last year, 1,507 Africans were apprehended in the country compared to 5,286 this year. During the same period 4,783 migrants from India and Bangladesh were also detained in Mexico, according to the data made public this month.

The information is alarming considering Africa and Bangladesh are hotbeds of terrorism and the fact that all the migrants are heading north into the United States. “These migrants, although less in numbers compared to migrants from Central America, increased significantly in the country,” a Mexican newspaper article states, confirming that “their principle objective is not to stay in Mexican territory but rather cross the border towards the United States.” The story also reveals that a growing number of Cubans, Haitians and south Americans, mainly from Brazil and Colombia, have also been apprehended by Mexican authorities trying to make their way to the U.S. border.

The spike in Africans is worrisome considering the State Department has determined that Africa is a major hub of Islamic terrorism, including al-Shabaab in the eastern part of the country and Boko Haram and ISIS in the west. Bangladesh is also a national security concern because the south Asian Islamic country is well known as a recruiting ground for terrorist groups such as ISIS and Al-Qaeda Indian Subcontinent (AQIS). Earlier this year a congressional probe revealed that migrants from terrorist nations, especially Bangladesh, are trying to enter the United States through Mexico at record rates.

Texas alone saw a whopping 300% increase in Bangladeshi nationals attempting to sneak into the country, according to the federal investigation outlined in a lengthy report.

I’m glad to see JW getting more involved in immigration issues. They may eventually get more information out of our government on these issues through their expertise with the Freedom of Information Act.

Who is encouraging this movement of Africans to Mexico and on to the US Border?

In 2011 I speculated it was NGOs and suggested a Congressional investigation was desperately needed.  Of course, for some reason, no one is interested in answering that question.

If you didn’t see it, check out my post yesterday at the newly reconstructed Refugee Resettlement Watch.

South African blacks don’t like foreigners—other black Africans—so they try to drive them out of SA or kill them.

The irony of course is that the nation dubbed the “Rainbow Nation” was supposed to be a socialist model, a multi-culti nirvana for the world after the largely white government was ousted and racism given the boot.  Now they have to call the tribalism of black South Africans “xenophobia” since the target of their discrimination is fellow blacks.

And, if you think this doesn’t affect you think again!  Those black Africans being persecuted by black South Africans are being brought to the US as legitimate refugees!

Here is a 2018 story from Mankato, Minnesota about how one Somali family got into the US as ‘refugees’ from South Africa.  The so-called Trump Muslim ban of Somalis doesn’t affect them because they didn’t come from Somalia!

Editor:  I’m mentioning RRW posts here because I have no subscription capability at RRW yet.

This news from earlier this month has been languishing in my posting queue and today I thought it was time for a little laugh.

I’ve been telling you about the African asylum seekers migrating to Maine where the welfare is excellent.

So many have arrived in Portland that new ‘welcoming’ communities needed to be found with available housing.

Here we have a story from the Associated Press in which the Africans say they don’t want to live in the forests of Maine.

Some families expressed fear about being relocated from the busy city to towns where the vast woods that are part of Maine’s identity could trigger bad memories from their journeys. They recalled seeing fellow asylum seekers fall to their deaths, get swept away by rivers, starve to death and get bitten by venomous snakes in Panama’s infamous Darien Gap, a jungle that’s known for dangerous wildlife and bandits.

These are city dwellers who expected to be set up in ethnic enclaves in Portland, not sent to small town Maine.

Neil Munro, writing at Breitbart (Hat tip: Mary) then picked up the story and had a little fun with it:

Migrants to Progressives: Protect Us from Our Fear of Snakes in Maine

“Maine probably isn’t the place a dedicated herpetologist would like to spend much time,” reports a webpage about snakes in Maine. “There are only nine species and two sub-species of snakes in the Pine Tree State, none of them venomous and only one considered endangered. The Maine Herpetological Society lists three other species as having “special concern” status, with dwindling numbers in the state.”

I was reminded of news I reported at Refugee Resettlement Watch a few years ago where Syrian Muslims were refusing to be placed in Sweden’s forested region because they feared the forests too.

That 2015 story is still available at The Local.  Asylum seekers refused to get off the bus that took them to a region of Sweden used primarily by holiday-seeking Swedes.

If they were truly running for their lives as they proclaim, then living where most of us would love to vacation because of its natural beauty should be gratefully accepted.