John Binder, writing at Breitbart has a very good report on the opening day of the Texas murder trial I told you about here:

A Tale of Two Trials

Binder addresses Chemirmir’s immigration status.  I wonder if the sensational case will be mentioned by any other national outlets. 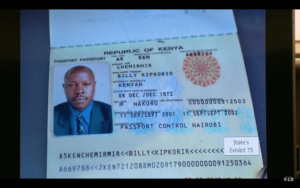 It would be so helpful if readers spread the news of this horrific case far and wide!

You surely can’t have missed the wall to wall coverage of the Kyle Rittenhouse trial where the teenager is accused of killing two Kenosha rioters and wounding a third when he feared they would kill him.

The Wisconsin National Guard has been called out in case he is found to be innocent of the charges filed against him and the thugs have a tantrum and riot again.

Here is just one of many stories in the mainstream media on the sensational trial.

But there is another trial beginning tomorrow in Dallas, Texas and I am guessing (maybe I will be wrong!) that unless you live in Texas (or read conservative news) the media will be silent when the infamous Billy Chemirmir, a Kenyan we permitted to live among us, will go on trial to face the first of many murder charges against him.

Chemirmir didn’t use a big scary gun as did Rittenhouse to protect himself, in fact he used pillows to allegedly smother at least 18 defenseless senior citizens, all but one were women, in order to steal their jewelry and other valuables.

Also, see this series from NBC 5 in Dallas (hope springs eternal that NBC will follow the trial as closely as every outlet has followed the Rittenhouse trial).

Stranger at the Door: How a Plano Grandmother May Have Stopped a Suspected Serial Killer

Untimely for the defense sidebar….

There are other dreadful murder and attempted murder cases that didn’t attract any national attention, why?  I think it is because like the Chemirmir case they go against the national media’s narrative that immigrants to America are just here to work hard and have a better life.

And, not to be overlooked is the fact that in most cases the victims of these evil people are often white and elderly.

John Binder reported recently on a case we covered at the time and has reported that Wilbur Ernesto Martinez-Guzman, a 20-year-old illegal alien from El Salvador will be sent away for life (on your dime!) for murdering four older Americans.  No big scary gun, just a smaller gun he stole from the ranch family.

And, not to be overlooked.  A Japanese art instructor at a liberal college pleaded guilty to attempting to kill another professor (not with a scary gun) but by beating her:

She straddled Savoy and punched her on the floor, the prosecutor said. She also used a fire poker, pruning shears, and a rock in the attack. Savoy said Hachiyanagi taunted her repeatedly by telling her she would be blinded, disfigured, then murdered.

So why the extensive media coverage of Rittenhouse and not Hachiyanagi, Martinez-Guzman, or most likely Chemirmir?

You know the answer….

Editor:  Sorry I have not been posting lately.  I will write something from time to time when something catches my eye, or when the unfairness of the media pushes me over the edge as this Chemirmir case has done.  See my tag for Billy Chemirmir for my many many posts on the case.