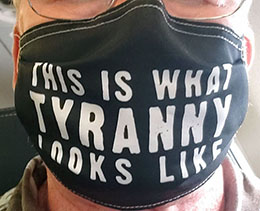 2 thoughts on “One Powerful Message Sent! Masking is Corporate Fascism”