If you do nothing else today, this is the ‘must read’ you have been waiting for.

(And, includes some of the things I have been saying in my ‘Rioting Leftists‘ series.)

The 58-page guide authored by Rich Higgins and Stephen Coughlin and published by Unconstrained Analytics is a handbook for your survival and for the Nation’s survival in the chaotic months (years?) ahead. (Hat tip: Leo) 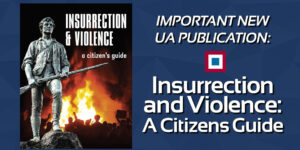 The United States of America is enveloped in crisis. Not since the Civil War, have we faced an insurgency and resistance movement with the capacity, capability, and very real potential to fundamentally change the structure of our republic. All, without passing a law. We are near a tipping point of insurrection and unlegislated change, from which the nation thus changed, will cease to be recognized or function as a representative republic.

The purpose for writing is to alert you to this fact – we are under attack by an ‘insurgency syndicate’ employing unconventional warfare tactics. The North American Insurgency Syndicate (NAIS) is currently gaining strength and they are on the offensive. This book endeavors to deliver an understanding of the insurgency, their goals, strategy and tactics. Then, to provide a framework to respond and protect your family, your property, your freedom, and our country.

As you read about violent insurgent groups, and their goal to fundamentally change our form of government, many a reader may be asking themselves “But, what can I do?” A rational response to this question is the motivation for our project. We offer a guide to assess your current position, analyze your risk, and help you make a reasoned plan to protect you, your family, and further; to provide you ways in which you can help the Nation.

For, if well-meaning citizens do nothing – do not recognize the danger, do not vote, do not volunteer at polling locations, do not influence others, do not prepare for their own defense, and do not push back against enemies of the Republic, then they are ceding space and power to the insurgents. The consequence of citizen inaction, at this perilous moment, is to put at risk the Constitution, our way of life, liberty and the pursuit of happiness. If law-abiding patriots across the country do not take prudent action, if they remain subdued and silent, then our nation will be fundamentally altered and cease to function as a republic.

We begin by increasing your “situational awareness.” The book describes the current situation in the United States – that we are at a critical point where the NAIS is successfully exploiting a national emergency to rapidly gain strength. We provide a synopsis of the various and disparate insurgent organizations and movements that are involved in direct-action violence, harassment, agitation, and social media attacks.

Then we explore their syndicate structure. At the tactical level, the NAIS relies upon self-organizing groups of insurgents united for insurrection. The syndicate, waging unconventional warfare with new and innovative tactics, intends to change or overthrow the government.

Here is a snip from Chapter 1 Insurrection and Violence: A Citizens Guide (.pdf) hammering the point that we are at war. 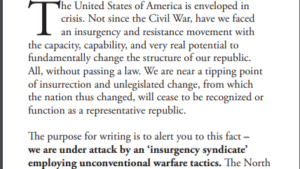 Keep reading because this is not your usual wonky analytical look at what we are facing (although there is thorough analysis), but includes chapters on what you can do to prepare and to fight back!

I was especially interested in Chapter 3 on preparation since that is what I have been yakking about for the last two months (and working on myself!).

Read it (maybe make a donation to Unconstrained Analytics) and then get to work!

Endnote and changing the subject:  If you are not a regular reader of Refugee Resettlement Watch, you might want to visit and see what is happening as this is the big month in which the President usually makes a determination about how many refugees we might admit in the coming fiscal year that begins on October 1.