…. the nation has a “moral responsibility to end homelessness.”

Yesterday I wrote about where one could live in peace in America.

Add Phoenix, and Arizona generally, as a place to avoid as homelessness grows for veterans and families while illegal aliens are given hotel rooms and three meals a day by the Biden (Americans last!) administration.

Take a couple of minutes to watch this youtube video below sent by a reader.

For those of us fortunate to live rural, or small town America, lives we are insulated from the deplorable conditions in most major Democrat run cities, including Phoenix where gated communities separate the elite from the homeless population.

(Most US cities of any size are run by Democrats.)

Homelessness is on the rise in America and NPR told us that in March.

The conventional wisdom for the rise is that living outdoors is healthier than indoors during the China Virus crisis.

But hotels are just fine for the illegal aliens?

In fact, some cities, like socialist San Francisco went so far as to sanction homeless camps to help fight the virus.

According to the Toronto Star, Phoenix was one of those cities, run by Democrats, that has normalized homeless encampments supposedly to keep the poor from getting sick.

Just for ‘fun’ search for images of homeless camps in America and you will wonder if this is really America, or some third world hell hole you are seeing.

Here is NPR on the rise in homelessness in America—even without the virus excuse.

HUD: Growth Of Homelessness During 2020 Was ‘Devastating,’ Even Before The Pandemic

The nation’s homeless population grew last year for the fourth year in a row. On a single night in January 2020, there were more than 580,000 individuals who were homeless in the United States, a 2% increase from the year before.

The numbers, released by the Department of Housing and Urban Development Thursday, do not reflect the impact of the pandemic.

“And we know the pandemic has only made the homelessness crisis worse,” HUD Secretary Marcia Fudge said in a video message accompanying the report. She called the numbers “devastating” and said the nation has a “moral responsibility to end homelessness.”

Among the report’s more sobering findings: homelessness among veterans and families did not improve for the first time in many years.

As has been the case for years, a disproportionate share of those experiencing homelessness were Black — about 39% of the total, though African Americans make up about 13% of the nation’s overall population. Twenty-three percent of those who were homeless last year identified as Hispanic or Latino.

I had no idea so many ‘people of color’ make up such a large percentage of the homeless. It seems, at least to me, that most photos of homeless people in corporate media reports show White drug-addled derelicts.

So why isn’t Black Lives Matter supporting their Black brothers instead of encouraging more immigrants who will continue to compete with Blacks for jobs and social services?

It could get worse….

Nevertheless, NPR goes on to say a lot will depend on how much money the Biden administration will make available for America’s homeless people.

But, not a word about what the border jumpers will add to the cost of stemming the tide of America’s growing poverty.  And, we haven’t even talked about crime growing along with poverty.

I’m wondering what kind of world are we leaving for our children and grandchildren?

Not just illegal aliens, see that the Biden refugee contractors are out and about in America looking for fresh territory in which to place legal third world migrants from Asia, Africa and the Middle East.

So, if your town doesn’t have homeless camps yet, don’t despair, Biden’s Open Borders will surely get you to poverty-parity real soon!

At RRW on Saturday:

Never let a good crisis go to waste!  Leftwing agitators are milking the death of George Floyd for all it is worth.

Just this morning someone sent me news about the Sunrise Movement, ostensibly a green new deal group, that is also out stirring up unrest that you can only assume was planned well in advance of the Minneapolis meltdown.

One wonders if Floyd hadn’t died what fuse were they planning to light to ignite the 2020 (election year) revolution.

Illegal immigrants protected by an Obama-era amnesty for adults who came to the U.S. as children are among the rioters arrested and charged with crimes in Arizona. One of them, 30-year-old Mexican illegal alien Maxima Guerrero, is a community organizer with a Phoenix-based grassroots migrant justice organization called Puente Movement.

More than 100,000 DACA applicants have criminal histories, according to figures released late last year by the U.S. government. Many have been arrested for serious crimes such as murder, rape and driving under the influence. The government can deport those charged with crimes, immediately stripping them of the Obama protections but that rarely occurs.

The recent Phoenix arrestees were apprehended in the course of criminal behavior, according to a local news report and information obtained by Judicial Watch from police sources on the ground. Guerrero and two other Dreamers were out rioting and looting in a “Justice for George Floyd” protest in downtown Phoenix, city police sources tellJudicial Watch.

Phoenix Police Chief Jeri Williams said this in the media about the vehicles occupied by the arrested Dreamers: “Those cars were used to fortify and give rocks and water bottles, food to those individuals who were there to commit crime and damage, to do dangerous things to our community.”

The information is especially relevant considering the source is an open borders advocate. A few years ago Williams, who joined protestors in downtown Phoenix, tried to make her law enforcement agency an illegal immigrant sanctuary at the request of a leftist group.

Judicial Watch obtained records of a secret meeting in 2017 in which the police chief of Arizona’s largest city took orders from Will Goana, policy director for the state chapter of the American Civil Liberties Union (ACLU).

Continue reading here.  There are links to supporting documents and other information.

I told you about Ahmed Mahad Mohamed, 21, and Abdi Yemani Hussein, 20,  here and here, but I hadn’t seen this news—-they were hitting the gym to get stronger for the beheadings they were planning.

Katie Pavlich had this short extra bit of news when the story broke (thanks to Cathy for sending it).

According to the indictment the two men, Ahmed Mahad Mohamed and Abdi Yemani Hussein, started hitting the gym in order to get stronger so they could easily perform beheadings.

“On or about June 26, 2019, MOHAMED told the UC (undercover FBI agent) that he and ‘abu’ jihad started going to the gym so they could get stronger and ‘behad those kuffar,'” the indictment states. “MOHAMED indicated that he wanted to make hijrah and asked for help from the UC. MOHAMED state that he was ‘a lion bu killing the kuffar and behading.’ In addition, MOHAMED told the UC, ‘if I go to Syria I want to be the behading person wallahi this kuffar I want to kill them so many I am thirsty their blood.’ MOHAMED indicated he wanted to travel to Syria, Egypt and/or Iraq.”

How many more refugees are out there with dreams of beheading the kuffar?

And, gee, in addition to paying for their initial resettlement to the US (did we, taxpayers, pay for the gym membership too?) we get to pay for their trials and incarcerations!  See my next post!

This morning I wanted to see whether the news of two days ago about Somali refugees being arrested in Arizona as they tried to board a plane for Egypt in order to join ISIS had reached the mainstream media.
Apparently other than a mention on Fox News that got the President’s attention and mentions on some Washington DC publications, the story is not getting much national coverage.
Did the Washington Post mention the news? Nope.  How about The New York Times? Nope again.
But I do see it mentioned on Yahoo Entertainment with this headline. LMHO!
The story is about Trump and his tweets!

President Trump on Tuesday used the megaphone that is his Twitter feed to draw attention to the arrest of two Somali refugees in Arizona who authorities say were planning to travel from Tucson to Egypt to join the Islamic State.


Ahmed Mahad Mohamed, 21, and Abdi Yemani Hussein, 20, were charged with providing support to a terror group. They were arrested Friday at Tucson International Airport.
According to federal authorities, Mohamed had told an undercover FBI agent during social media exchanges that he was “thirsty” for the blood of disbelievers and that “the best wake up call is [for the] Islamic State to get victory or another 911.”
The president also tagged “Fox & Friends,” typically an indication that the tweet was responding to a segment on his favorite cable news morning show.  [Maybe the Prez watches Fox because it reports on news like this!—ed]
The indictment did not indicate that the two men had committed any acts of violence in the United States.

That last line is the Left’s go-to position on any refugee terrorist charge.  Well they didn’t kill any Americans yet!  Duh! Because law enforcement nabbed them before they could!
By the way, this pair of Islamic refugee terrorists most likely got into the US during the Obama era.
It’s a very good thing that Trump has his Twitter “megaphone.”  Shame the mainstream media!  Keep ’em coming! 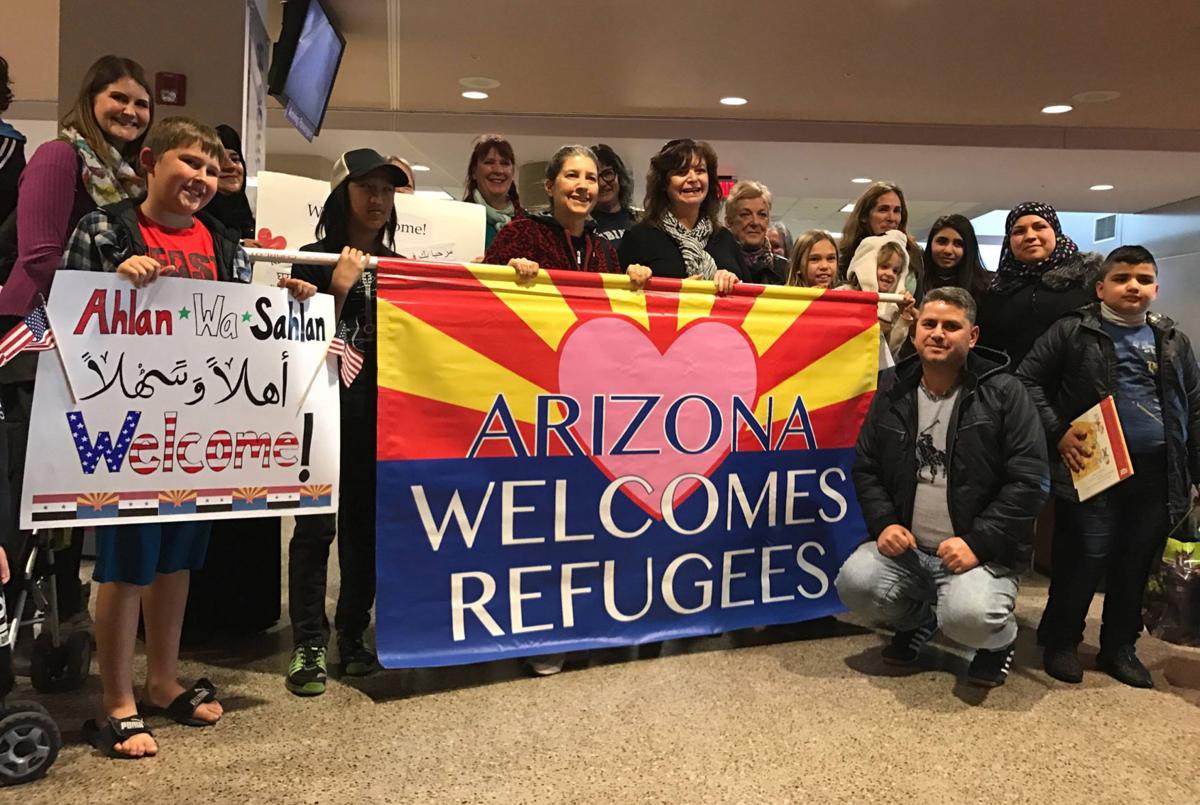